Φ.Ε.Κ. or the Government Gazette, is the official newspaper of the Greek Government, and as such, is recognized as the only governmental form through which all laws, decrees, appointments and judgments are published. The first issue was printed on February 16, 1833 and was called the Newspaper of the Government of the Kingdom of Greece  (at that time, Greece was ruled by King Otto). Until June 1835 the paper was bilingual and each page contained two columns:  the left was written in Greek and the right in German. Some issues after 1835 are in Greek and French.

The website of the National Printing Office of Greece has uploaded official documents which have been digitized at http://www.et.gr. Digitized images of Φ.Ε.Κ., published weekly from 1833 to present, can be found at:  http://www.et.gr/index.php/anazitisi-fek

Following are instructions to access this site. NOTE: I have used a Google Chrome browser extension to translate these pages into English. If you do not use a translating extension, the pages will be in Greek.

The URL http://www.et.gr/index.php/anazitisi-fek will take you to this page:

A drop down box, which lists the years of the newspaper, begins with the current year of 2018. Clicking on the down arrow next to 2018 will reveal all years that the paper was published, going back to 1833.

The letters A, B, etc. designate various issues of the newspaper. From 1833-1930, there is only the letter “A.” After 1930, additional letters appear. Clicking on a letter, then clicking “search” will take you to .pdf versions of the paper for the year and letter you designate.

Example: how to find the first issue published in 1833.

The following screen appears.  We see that this year has three pages with a total of 42 issues. Click the right arrow, or the next page number, to scroll through the list.

To read the papers, you must download them. Click on the pdf logo, then download and save to your computer. You may see the following screen which advises that Adobe Acrobat needs to be installed to view the files. If you have Acrobat installed, you can bypass this screen.

Your file will download. Be sure to save it to your folder of choice. 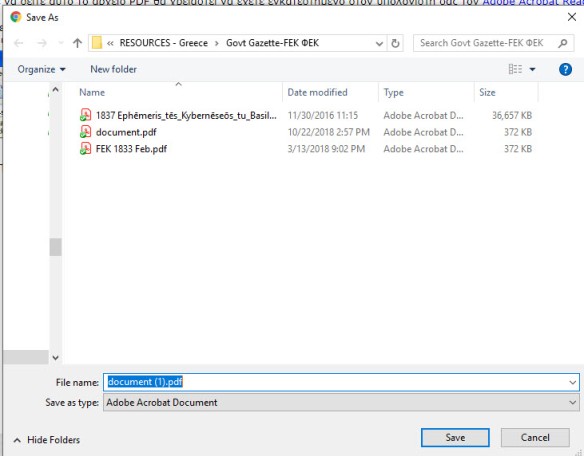 When you open the pdf file, the newspaper image will appear. This is page one of the first issue, dated February 16, 1833. There are four pages of this issue.

Start on page one and scroll through, to understand the layout of the issue. Also, notice that issues have different numbers of pages. Some have four; others may have many more.

I initially became interested in exploring Φ.Ε.Κ. when I found FamilySearch microfilms  which had  lists of men being called for military duty or appointed as jurors. These lists were printed by region, then prefecture, then village, then men’s names. The following image is an 1849 list of men from Sparta who were called as jurors. 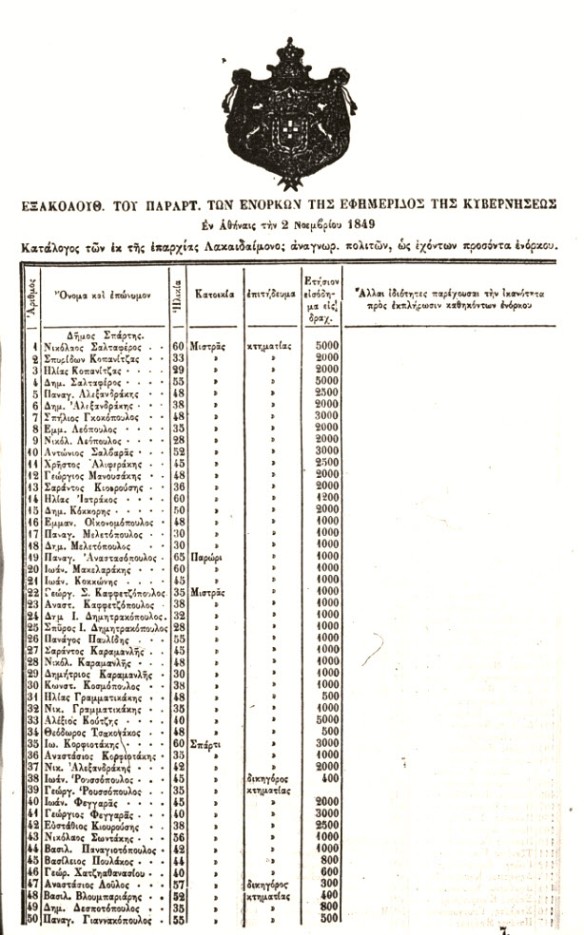 When I went to the Φ.Ε.Κ. website to look for this issue (2 November 1849), I could not understand why the online issue for that date did not contain this information. I asked my friend and historian, Giannis Mihalakakos, to help me. He explained that every issue of Φ.Ε.Κ. is different; that maybe for legal concerns, these lists may not be part of the normal newspaper but are published at later dates. These lists may also have been part of an entirely different series, perhaps an addendum to the weekly paper, which were published separately. Frustrating!

The Bavarian State Library has bound volumes of Φ.Ε.Κ. under the title Ephēmeris tēs Kybernēseōs tu Basileiu tēs Hellados. All of the issues of the newspaper for an individual year were bound into one volume for that year. In 2010, Google Books digitized these volumes. Click on this link for free access. I found volumes for the years 1826-1864. You will need to be logged into Google to add the books to your Google Play library and read them. I cannot read the old Greek, but I scroll through the volumes, looking for lists of names.

You never know what you are going to find in these books. Here is a page from the volume 1860, 1862 which has numerous charts for all the prefectures of Greece with a variety of data. This is a chart of marriages, births and deaths for Laconia. 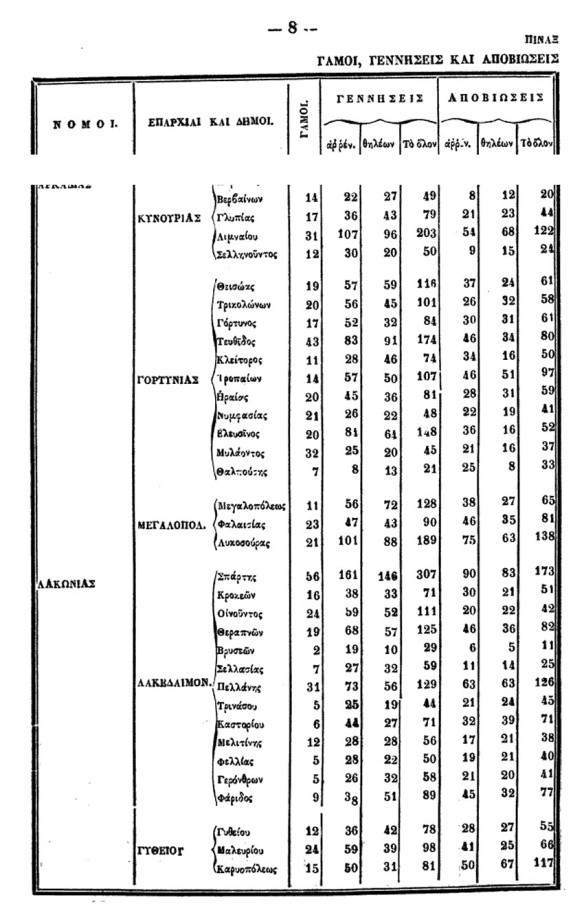 This link is to a 1908 issue of the ΦΕΚ (official government newspaper) which provides population statistics on each area of Greece. It is arranged by Nomos, then Dimos, then Village. Statistics are of male, female and total population of each village. An index of Dimos starts on page 131; an index of individual villages starts on page 223. It is fascinating to see the population of our villages at the time of the beginning of mass emigration from Greece.

Mentioned previously is a reference to FamilySearch microfilms which have some issues of Φ.Ε.Κ. containing lists of men who served as jurors or were called into the military.  FamilySearch is currently the only website which has records from Greece. In the 1980’s, over 5,000 thousand rolls of microfilm were filmed with permission from the General State Archives of Greece (GAK).  A list is found in the FamilySearch Catalog under Greek microfilms. In addition, a pdf document listing all Greek films can be downloaded here.

Please note that although these microfilms are now digitized, contractual restrictions do not allow them to be openly published on the internet. They can, however, be viewed at any Family History Center or affiliate library.

Searching through issues of Φ.Ε.Κ. can be tedious, but consider it a treasure hunt–finding your ancestor’s name is priceless!

1 thought on “Φ.Ε.Κ. The Official Newspaper of the Government of Greece”

This site uses Akismet to reduce spam. Learn how your comment data is processed.