My cousin, Father Eugene Pappas, is the priest at Three Hierarchs Church in Brooklyn, New York. He is also the host of a weekly radio show, “Matters of Conscience” which airs on Saturdays at 1:00 p.m. eastern time at CosmosFM – Hellenic Radio in New York City. He invited me to speak about my experiences this past summer in digitizing the church books in 140 villages in Lakonia, and that interview was held yesterday.

The URL to listen to the broadcast is here.

I had written about Father Eugene in 2016 when he was honored for serving 50 years as a Greek Orthodox priest, and 35 years at Three Hierarchs Church (see this post).  He is a man of boundless energy, and is committed to serving his community as an activist and a teacher, along with his countless hours of priesthood duty. I have great admiration and respect for him.

We are related through the Papagiannakos (Pappas) line — my mother was a Papagiannakos. Many years ago when I was first inquiring about my family roots, my relatives encouraged me to contact Father Eugene because “he is the only one in the family who knows our history.” Now there are two of us! His enthusiasm for this topic has encouraged me to keep digging.

Our discussion yesterday covered many topics such as:

Our conversation was lively and punctuated with Father’s insights and memories. He thanked me for digitizing the books at Three Hierarchs Church, and expressed gratitude and admiration for our team which is advancing the preservation work in Greece.

When I was at the Metropolis, sitting alone at a desk for hours on end, “flipping and clicking” (flipping pages and clicking the camera), I maintained my enthusiasm by thinking of the many people who would benefit from having access to these images. I so appreciate yesterday’s opportunity to inform people of the work we are doing and the opportunities they will soon have to review records that were previously inaccessible.

Again, the URL to the radio broadcast is here, and “Matters of Conscience” begins at the 1:16:53 mark.

Research at the Mitropolis of the Greek Orthodox Church, Sparta

I had spent months preparing for this research trip, and I was anxious to visit the Archives and the Mitropolis of the Greek Orthodox Church with my friend, Gregory Kontos. We had decided in advance that our first stop would be the Mitropolis to search marriage and other church records. Thinking ahead, I had asked Father Eugene Pappas, a “cousin” on my mother’s line (we’re still trying to pinpoint our common ancestor) to write a letter to the Bishop of Sparta, asking permission for Gregory and me to conduct research at the Mitropolis at a specific date and time. In addition, Gregory’s father had called the Bishop who had known Gregory’s grandfather.

Letter from Father Eugene to the Bishop of Sparta, requesting permission for Gregory and me to research

The groundwork was laid. Early on a Monday morning, Gregory and I approached this stately and beautiful building that rises majestically in the midst of the busy city. 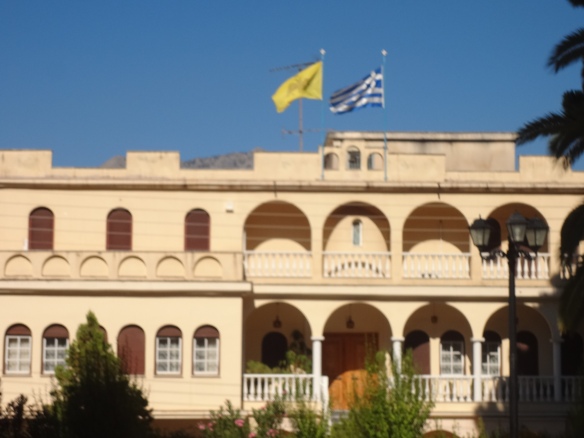 The Mitropolis of the Greek Orthodox Church, Sparta

It is one thing to think about doing research in a religious institution, but it is quite another to actually be there. Gregory and I felt somewhat intimidated as we knocked on the door, but that escalated to total intimidation when it was answered by a somber faced priest with a long beard and piercing black eyes. His floor-length black robe and round cap added to our anxiety level. This was not like walking into the local library and asking for help! Thank goodness Gregory was with me! He explained in Greek who we were, and immediately the priest smiled and invited us in. Our letter to the Bishop had been received and we were expected. With great relief, we followed the priest into a beautiful waiting room ringed with icons, paintings and mosaics.

Waiting room of the Mitropolis, Sparta

Shortly, we were cordially greeted by a man who told us that the Bishop had received Father Eugene’s letter and that we were welcome to review the records. He handed us the Bishop’s written response. It was both exciting and unsettling to have this document — just think, the Bishop now knows my name!

Letter from Bishop of Sparta giving us permission to view records

We were invited into a spacious, comfortable room with a large conference table. Our host brought us a plate of chocolates and water. He asked which books we wanted to review, and graciously brought us any that we asked for. The Mitropolis has books of marriage records, but not baptismal or death — those are kept by the local churches. Although I work with historical documents at the National Archives and the Maryland Archives, I was still awed to see these precious registers. Turning their fragile pages, I wished with all my heart that these records could be made available to the thousands of people who are seeking to their Spartan roots.

I wished I could have read these records! The old handwriting was just too difficult for me.

As hard as I tried, I was extremely disappointed that I could not read the old handwriting. I was occasionally able to decipher first names but the rest of the script was beyond my limited abilities. Realizing quickly that I would be of no use to Gregory, we came up with a plan. He would read the records and when he came to one I needed, I would take the digital photo. I gave him the names and approximate marriage dates for my great-grandparents. Because just a few first names were used in the late 1800’s (mostly the names of saints for males and a derivative for females) they were easy to recognize. Gregory found it was quicker to scan the pages by looking for first names.

Gregory finds the marriage record of my great-great grandparents.

I was thrilled when he found the marriage record for my great grandparents, Panagiotis Nikolaos Papagiannakos and Aikaterini Eliopoulou, married December 22, 1867!

As you can see, the condition of these old registers is heartbreaking. The pages are crumbling and tattered. It truly frightens me to think that, without digital preservation,  the priceless information contained therein will be lost to future generations.

As we perused the registers, I concluded that they must be copies of originals because the same ink and handwriting would be found on several pages, then it would change. I wondered if the Mitropolis received records from the churches and then transcribed the information. These marriage registers listed the date of the marriage, name of groom, name of bride, occasionally the bride’s father’s name, the names of witnesses and the name of the priest. There was a column for notes, but it was usually blank. I also wondered if the original church records had more information, such as the names of the parents.

The books are kept chronologically by year and the data is not sorted by village. This is both good and bad:  good because if you don’t know the exact village of your ancestor, you can browse chronologically and look for your surnames; bad because if you do know the village but you’re not sure of the year, you have to read pages and pages of names until you find your ancestor.

Occasionally, a priest would stop in and ask how our work was going. When he saw the excitement in my face and voice as I said in my broken Greek that Gregory had found the marriage record for my great-grandparents, a smile crossed his face. After four hours, Gregory had found a few records with my surnames. Because we could not search a specific village, we realized that it would take many hours (perhaps days) to look through all the registers. We decided to leave, thanking our gracious guests for their help and cordiality.

I left with a deep appreciation for the kindness and respect that we were granted. The clergy allowed us to enter their hallowed building and trusted us with their books and records. I will be ever grateful to them.

Next… on to the Archives!

My family tree is posted on several sites. Click on the title to access:  Ancestry.com, MyHeritage.com, FamilySearch.org and at TribalPages.com.