In Spartan villages of the 1800’s, the predominant occupations were shepherds, landowners and farmers. A quick look at the Voter Lists of 18721  corroborate that the majority of men spent their days planting and harvesting fields, and tending sheep and goats. This is certainly true for my great-grandparents.

One of my favorite genealogy treasures is a contract between my 2nd great grandfather, Ioannis Eftaxias of Mystras, and Panagiotis Sampatis. Dated December 23, 1863, it documents this transaction:

Panagiotis Sampatis declared that from this day he gives Ioannis Eftaxias 30 valued and already given to him sheep worth of 240 drachmas. They all have the following age: a sheep, two sheep 10 months old, four sheep 8 months old, four sheep 6 months old, three sheep 4 months old, four sheep, seven female sheep,  and a big ram: in total thirty (30). Ioannis Eftaxias will have them and will be taking care of them and will be protecting and using them as of his own from today until three years later, when the agreement will be annulled.  Ioannis Eftaxias has to give Panagiotis Sampatis fifty (50) okas from the cheese producted, ten (10) okas of wool and two (2) sheep from his pasture until year 1864. In the other two following years, 1865 and 1866, [Ioannis Eftaxias has to give Panagiotis] sixty (60) okas of cheese, ten (10) okas of wool and three (3) sheep per year. Also, if Ioannis Eftaxias fails to give Panagiotis the above mentioned in time, he will have to reimburse Panagiotis for the current pasture at the marketplace of Sparta. At the end of the agreement, in December 1866, he (Ioannis) has to return the mentioned sheep in the same quality and at the same age he was given them unless a great godsend catastrophe happens. And if Ioannis Eftaxias fails to return all the sheep he was given, he’ll have to pay eight (8) drachmas for each one of them, in total 240 drachmas; also, at the same time, he’ll pay Panagiotis for the deficit created by the sheep’s delayed return. Ioannis Eftaxias stated that he accepts the agreement above, after getting the mentioned sheep today, and promises to give Panagiotis Sampatis his share[ in time and to fully satisfy his obligations without any excuses.2 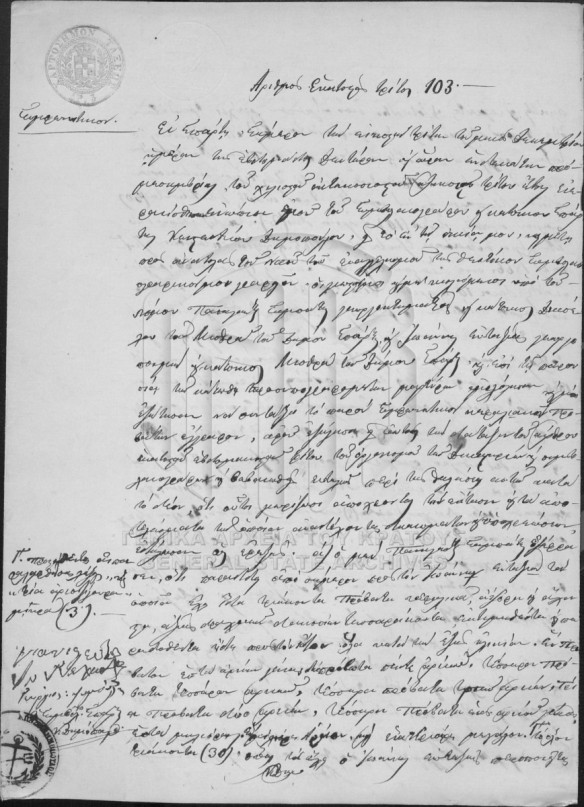 (The full contract and translation can be accessed here.)

Knowing that my ancestors were shepherds, I was especially interested in exploring the Shepherd’s Registration dated 1831. I learned of this collection through researcher Konstandinos Koutsodontis, Greek Genealogist, who described the purpose of this census:
Shepherds’ registrations were conducted by the Kapodistrian government for tax purposes and for the boundary delimitation of animal grazing lands. After liberation from Ottoman rule, one of the major concerns of the new government was the reconstruction of finance (Greece had taken huge loans to conduct the War of Independence and had to repay Britain, France and Russia). Taxes were a great source especially when the majority (~80%) of the Greek citizens were farmers and shepherds. Similar shepherd tax censuses were conducted some years later (1834-1840) by the king Othon.
Konstandinos conducted a search for me in 1831 Shepherd’s Registration. Although not all of my villages had these records, they did exist for three, and my ancestral family owned:

Konstandinos explained that having a horse or a large number of goats or sheep was an indication of relative financial status. This helps me further understand and respect the standing of my family within their communities.

Because I had assembled the Zaharakis family tree (see post here), I knew exactly who these three men were in 1831. Understanding that most 1800’s villages were small in size, it is not difficult to construct family trees if you have the basic resources:  Voter Lists, Male Registers (Mitroon Arrenon), Town Registers (Dimotologion), Church birth, marriage, death records, school records.

Finding additional “beyond the basics” records entails hiring a professional who can locate and translate the documents. (Even if I knew where to find these documents, there’s no way I could have ever read the Zaharakis names above!) To me, it is well worth the small expense. These additional records add more details to my people and make these long-ago ancestors more “real” to me.
__________

1My sincere gratitude to Georgia Stryker Keilman for translating many 1872 voter lists and posting them on her blog, Hellenic Genealogy Geek.  Lists for Sparta and other villages of Lakedaimona can be found by scrolling to File #25 here.

2My deepest appreciation to Gregory Kontos of GreekAncestry.net for finding this document at the Sparta GAK in 2014, and translating it for me.

In 1982, Sarantos P. Antonakos published Amykles, a history book about his native village. Amykles is one of my ancestral villages, too–the birthplace of my 3rd great grandfather, Panagiotis Zarafonitis. I am beyond excited to have found this book in the Central Library of Sparta, and I copied some of the pages relevant to my family. With sincere thanks to Giannis Michalakakos for his translations and history lessons, I am learning much about this beautiful village and the lives of my ancestors. This is the first posts of several, with excerpts from the book. 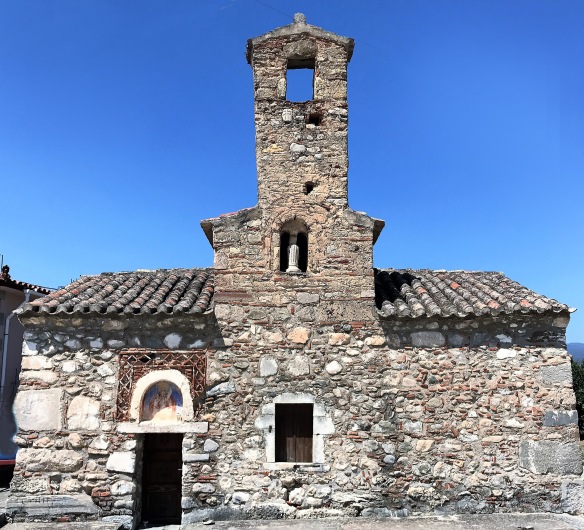 In the Preface, Mr. Antonakos writes: Amykles was the salt and the pepper for  the Spartans and for the whole Laconian peninsula, a religious, cultural and commercial center. The people lived here hundreds of years in the middle of a very fertile plain through which the Evrotas River passed and it was from then, until today, the subject of study of hundreds of scientists and researchers.

Among several profiles of prominent men in Amykles is a paragraph about Georgios Dimitrios Zarafonitis, a soldier who fought with distinction in the Revolution of 1821. 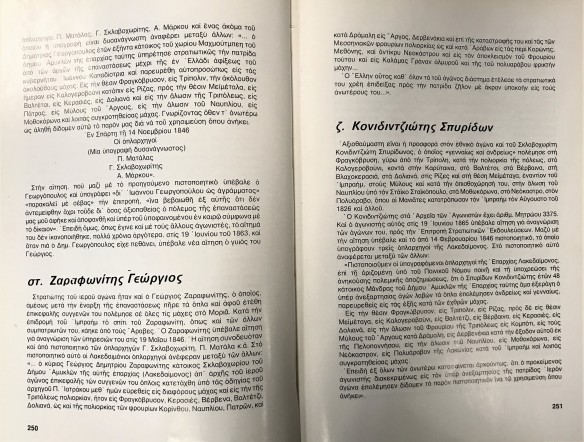 Soldier of the sacred struggle was Georgios Zarafonitis, who, immediately after the start of the revolution took up arms, and after he entered became the head of relatives who fought all the battles in Morea.
During the invasion of Ibrahim Pasha, the house of Zarafonitis was burned to the ground by the Arabs, like many of his fellow countrymen. Zarafonitis sent an application to the state to recognize his services on 19 May 1846 [he is applying for an Aristeia award]. The application included a certificate from the chieftains G. Sklavohoriti, P. Matalo, etc.
In this certificate, the chieftains of Lacedaimon referred among others “… Mr. George Dimitriou Zarafonitis, citizen of Sklavohori of the municipality Amykles of this province (Lacedaemon) from the beginning of the Holy Fight, in charge of his relatives, put himself under the direction of the chief Panagiotis Giatrakos, and he was with us in different battles like the seige of Tripolis, the battle of Fragoviso, Kerasis, Ververa, Valtezi, Doliana, even in the siege of the fortress Nafplion, Corinth, Patra and when Dramali Pascha came in Argos, Vervenakia and after his disaster in Messinia, fought against Arabs in Coroni, Methoni, and Neokastro, also in Kalamata in Verga of Almyro and in the horrible battle of Polyaravo.
This Greek during all the time of the revolution served military and did his duty with passion and extreme obedience to his superior officers. from his certificate I can assume that he was a very good soldier.”

Unfortunately, a paper trail between this hero of the Revolution and my Panagiotis does not exist. But using “educated deduction” and knowing that families of the same name from the same village are related, I can claim Georgios as part of my ancestral clan.

Another reference to Georgios is found in a list of men from Sklavohori who served as Jurors. This was published on 2 November 1894 in ΦΕΚ, the official newspaper of the Government of Greece. In the page below, he is enumerated on line 12; he is age 50 and a resident of Sklavohori (click on image to enlarge). 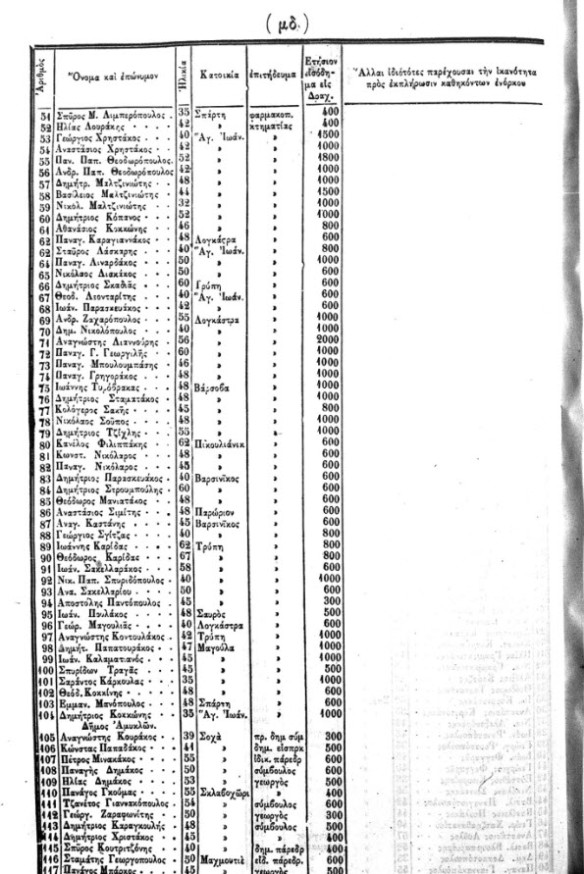 Sklavohori, the home of Panagiotis and Georgios, is the same village as Amykles. As is common in areas of foreign dominion, name changes occurred over the centuries. It is an unusual word, certainly not of Greek origin, and Mr. Antonakos addresses this on page 201, Sklavohori. It is a fascinating study.

a.  Some researchers opine that the name was given when Slavs occupied the area. However, Slavic tribes resided in the region known as Amykles in 750 A.D;  and the name “Sklavohori” is not mentioned in any documentation until 1432 — 700 years after the Slavs departed.

b.  When St. Nikon resided in Lacedaimon from 968 to 998, the village was called Amykles and Amyklion. When the life story of St. Nikon was written in 1142, the region still was known as Amykles; proving that the name change occurred later.

c.  All of the Slavic toponyms in Laconia, which are many, were given when the Slavic tribes settled; this did not happen in Sklavohori.

d.  No villages in the plains of Evrotas (where Amykles is located) have Slavic names. Slavic place names are found in mountain villages, where the Slavic tribes retreated so as to remain inaccessible from those determined to evict them (the Franks, the Byzantines, etc.).

These facts support the theory that the name Sklavohori was given much later than the Slavic occupation of the region. Thus, Mr. Antonakos proposes two other, more plausible, explanations:

a.  The name comes from the word, “slave” or “slavery.”  Feudal rulers enslaved Greek citizens, and gave them land to farm, which was located in the fertile plains of Sparta. A literal translation of the name, Sklav-ohori, would be “village of slaves.”

b.  In the island of Tinos in the Aegean Sea, there a a village named Sklavohori. However, there was never a Slavic presence there. The village was given its name because its citizens had been enslaved.

As I wandered through Amykles/Sklavohori in July, I could not imagine this village of my ancestors once being a den of enslavement. The land is a beautiful and abundant valley nestled under the Taygetos mountains; its citizens are hospitable, filled with the spirit of φιλότιμο (filotimo).

The beautiful cemetery belies the hardships and tragedies that the heroes and citizens of Amykles overcame. My family is among them. 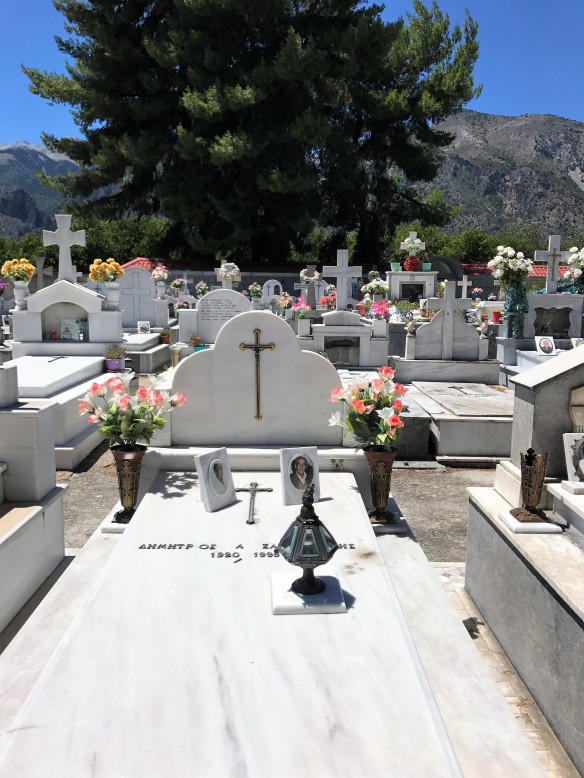 My family tree is posted on several sites. Click on the title to access:  Ancestry.com, MyHeritage.com, FamilySearch.org and at TribalPages.com.